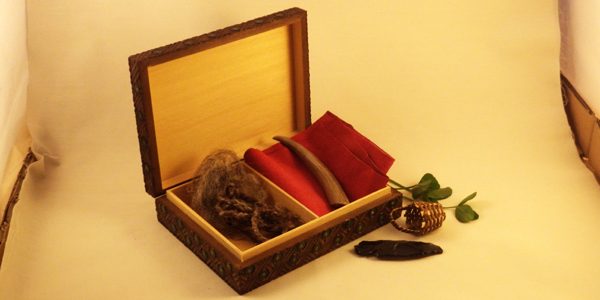 For years, whenever I traveled I carried my altar accoutrements in a drawstring bag that I wedged into a corner of my suitcase or backpack. Along the way, I prayed nothing would break or fall out and get lost. But since my spiritual practice is an integral part of my daily life, I rarely felt I could leave everything behind when I was traveling. I like to have a physical focus, even if it’s a small one, which means carrying some Pagan loot around with me when I go places.

The traveling bag wasn’t the best solution, but it was all I could think of.  Then a member of Ariadne’s Tribe, my discussion group about modern Minoan Paganism, shared a photo of a tiny shrine she had made out of a little box she found at a thrift store. Inspiration! Not only was it admittedly adorable (shades of childhood dollhouses flitted through my mind), but it was sturdy. No more crushed incense sifting through my clothes; no more tears upon discovering that the head had snapped off my favourite goddess figurine.

So off I went to cruise local thrift stores. The first thing I realized as I poked through piles of little decorative containers was that I needed more than just a plain box if I wanted my creation to work as a safe and sturdy traveling shrine. Thankfully, strewn among the boxes that had previously contained stationery sets and fancy soap, there were little jewellery boxes as well. These had compartmentalized trays that would be just perfect for keeping my sacred items from rattling around loose and breaking. And the compartments would save me from having to wrap each object in tissue paper or fabric to keep them from getting tangled up with each other.

Eventually I found a small jewellery box with a lift-out tray and another that looked like it originally housed two decks of playing cards. The jewellery box was destined to be a Minoan traveling shrine and the other was meant for my ancestors, who are an important part of my spiritual practice. But before I could use the jewellery box, it needed some serious redecoration to hide the shiny, kitties-and-flowers paper that was plastered all over it.

The first thing I discovered is that acrylic paint, brushed on by hand, was thick enough that the tray wouldn’t fit back in the box and the lid wouldn’t close. Oops. Time to get out the sandpaper. In the end I settled on spray paint, applied just thickly enough to cover the original print, but no thicker. It might also work to cover the outside of your traveling shrine in fabric, but you’d have to be careful not to apply it to any of the overlapping areas such as the lid closure or the section where the tray fits, since fabric-plus-glue is even thicker than paint.

Once I had the box painted a gentle cream, I decided I wanted to decorate it. Lacking any immediate inspiration, I decided to meditate not just on the decorations, but on how I should focus the shrine, who or what would travel in it. I began to feel strongly that my little box should be a multi-purpose tiny sacred place, adaptable to any of the Minoan deities I work with regularly. That meant making sure any decorations I applied would work for a good handful of gods and goddesses and not just one. They should also be lovely to look at, since the Minoans valued beauty and art in their temples, shrines, and other sacred places.

I had painted the box the soft off-white colour of the plaster background from the Minoan frescoes, so I printed some photos of Minoan frescoes — lilies and birds, mostly, symbols that encompass a broad set of meanings and that will work for all the Minoan deities I have regular relationships with. I trimmed the frescoes and glued them to the box, both inside and out, as well as the tray compartments.

Once the Minoan shrine was done, I turned my attention to the other box, the ancestor shrine. It had a beautiful carved wood design on the outside; the inside was a lighter-colored wood. In the end, all I did was trim off the ribbons that had held the card decks inside and it felt ready to use.

Then I began to outfit my two portable shrines for travel, and I discovered a problem. Since I had chosen boxes that were small enough to hold easily in one hand, most of my regular altar getup wouldn’t fit in it. At first I found that frustrating, but then I realized this was an opportunity to collect up or create special, tiny sacred objects that were dedicated solely to these portable shrines. 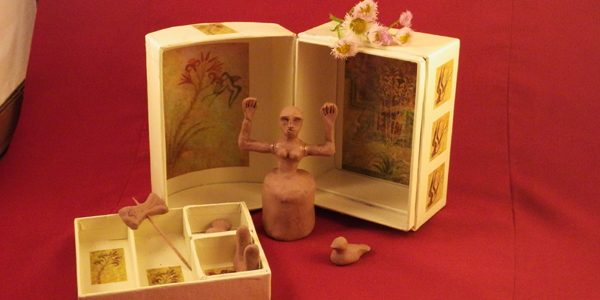 For the Minoan shrine I used air-dry clay to make some tiny figurines that would fit into the compartments. Then I scoured my altars as well as my jewellery and craft supplies for small items — stones, pendants, beads — that would make good additions to each shrine. Incense cones are the right size for these little shrines, so I added them along with small fireproof holders. Last, I tucked in a miniature altar cloth for each one.

These shrines are wonderful additions to my traveling gear. I just slip one into a corner of my suitcase and go. When I arrive at my destination, setup is easy. The box itself becomes a tiny shrine “building” and I have all the altar ware right there, ready to go.

It turns out, I like these tiny shrines so much, I often end up leaving them out at home, set up on my desk or coffee table. They’re a sweet little reminder that my spiritual practice doesn’t have to be big in order to be meaningful.