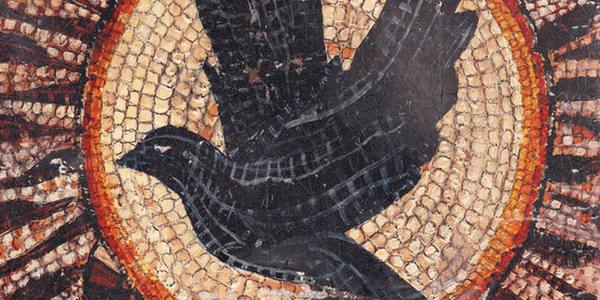 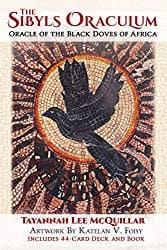 The Sibyls Oraculum is inspired by the Libyan sibyls, or “prophetesses,” who were reputed to have the power of prophecy, speaking the will of deity, and divination. Tayannah Lee McQuillar has infused this deck with a deep sense of history and place, and it makes for a remarkable oracle.

And this is where I should note that I’m probably the wrong person to review this deck. I’m a generic white Canadian lacking a background in ancient North African art and history. (My research focuses on early modern European art and history.) Yet, when the deck arrived unsolicited in my mailbox, I found myself enchanted by Katelan V. Foisey’s artwork, as it reminded me of Byzantine mosaics I had seen in Venice and Ravenna, Italy. Soon I would discover that there was a reason for this, as McQuillar explains that they were inspired by Libyan mosaics. Unfamiliar with this history, I’m looking forward to exploring it further, and McQuillar proves an informative guide.

Indeed, these kinds of antecedents run through the story of the deck and the oracles that inspired it. McQuillar writes that the oldest recorded oracle was in Kemet (Egypt), in a temple dedicated to Wadjet, a snake-headed goddess. She writes that Libyan oracles were the antecedent to later Greek and Roman oracles,1 and indeed there is a lot of shared symbolism between them. She highlights the syncretic nature of spiritual practices in the ancient Mediterranean. McQuillar also gives an account of the sibyl’s value to those in power, and how this was curbed with the advent of Christianity.2

McQuillar describes the oracle as “designed to advise seekers based on a traditional African worldview,” and she provides numerous examples of the way this philosophy is infused into the deck, emphasizing positive collectivity, reverence for one’s ancestors, and respect for mysticism and mystics, among other values.3 The deck is subtitled “Oracle of the Black Doves of Africa,” which refers to the two black doves the ancient Greek historian Herodotus described as giving prophecy for the location of two temples. McQuillar notes that the dove was a symbol of the soul among the cultures of the ancient Mediterranean.4 Doves have since garnered divine associations in Jewish and Christian traditions.5

As noted, the imagery on the cards resemble figurative mosaics, though no human beings are represented. McQuillar is quick to note that the meanings of the symbols given in the accompanying book only relate to this deck, and that they have a multiplicity of meanings outside of it.6 The cards and the descriptions given reflect the mythologies of several ancient Mediterranean cultures: Libyan, Nubian, Kemetian, Greek, Roman, Phonetician, Canaanite, and Etruscan, among others.7 She offers suggestions for how to “awaken” the symbols within oneself, particularly if one has no prior experience with that symbol.8 The example she gives is of an ox-drawn cart — one that’s not familiar to me in daily life, so I appreciate these suggestions for how to bring awareness to the physical reality behind the symbol.

In the ancient Mediterranean, McQuillar writes, “omens were not thought to foretell the future,” but rather to “reflect a conditional future that could be altered with proper rituals if the change was seen to be unfavourable.”9 I like this approach, and it’s in line with my own thinking on this. In a personal tarot reading, after reading the advice in the cards, I’ll sometimes shift them around to suggest a more favourable outcome before putting them away. In this way, I leave the reading with a clearer sense of where I want things to rest. Here, McQuillar describes this type of oracle reading as more of a suggestion of the way things are now, so that you can change the things you need to for a better outcome.

Indeed, she stresses that the Sibyls Oraculum is not intended for fortune-telling, but rather for self-examination and decision making that focuses on root causes, rather than end results.10 The oracle comments on situations, it doesn’t provide solutions in the usual sense.

The backs of the cards are colour-coded: black for core issues, copper for projection, blue for “cool” action, and red for “hot” action.11 The cards are read as a set of four — one card from each category. Sample readings are offered, accompanied by advice based on a situation outlined, in order to provide a sense of how the oracle works. The result is straightforward practical advice you can use.

McQuillar recommends that one read the cards for major events, and not as an everyday tool. She further suggests that there’s nothing to be gained from doing a reading when you won’t be dissuaded from the result you want.

This leads into a lengthy quiz (121 questions) to determine your current outlook in 11 key areas in your make up, based on the core issue cards (black). It was an interesting exercise to determine empowering and disempowering habits of mind. The responses were cut and dry, but there were many instances where I wanted to challenge this, and offer equivocations, which was not permitted. There were other instances where I could say “not anymore,” which means I’m changing, and (mostly) for the better, and that was encouraging. It helped me to identify areas that I need to be more mindful of, and journalling helped me articulate fears I’d previously tried to bury. That was not something I expected to delve into with this oracle, but I’m glad for the opportunity for reflection.

After this, I did a reading for myself based on a major change upcoming in my life, in order to get a lay of the land. The results had more depth than I expected from a mere four cards, and it’s given me more to consider as I move forward.

The Sibyls Oraculum is more than just another oracle deck, it’s a guide to living your most fulfilling life for yourself, your family, and your community. The holistic approach it offers touches on many aspects of well-being, and the complex insights it offers are rewarding.