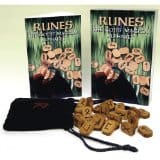 This set consists of 25 runes, a black bag, and a 64 page book. I have minor quibbles with some of the information contained in this book, as well as the inclusion of the 25th (blank) rune. However, before I explain what I object to I have to say that the runic set itself is well made, for the most part. The runes are burned into the surface of the wooden tiles rather lightly. In fact, the rune “Rado” is almost indistinguishable from “Wunjo” in the set I received. A slightly deeper burn would make them more durable in the long run, but perhaps the purchaser could make this modification themselves, as a way of putting their own energy into the runes.

In the traditional 24 runes of the futhark set there are a number of runes which cannot be read as reverse because their design is symmetrical (Gebo, Hagalaz, Isa, Iera, Erhwaz, Sowelo, Inguz, and Dagaz). Despite this, Ms. Tuan gives reversed meanings for all of the traditional runes. How you could tell if one of these eight was reversed is beyond my imagination.

Then we come to that vexing 25th rune. The problem is not the fact that it changes the number of runes (they have varied from as few as 16 to as many as 33 depending on time and location). The problem is that it didn’t exist in any historical context until less than 100 years ago. As such, the blank (“Odin”) rune is a real Johnny-come-lately with no traditional meanings or associations. Does that mean it is “wrong”? By no means, it is merely non-traditional.

At one time rune masters would not have carried a set of runes with them. They would have created one on the spot as needed. Later, when it became convenient to have a set in your possession there would have been one (or more) blank included so that if one were lost or damaged, it could be replaced from matching wood (so as not to be easily distinguished from the remainder). These blanks would have played no part in the actual reading and would have been set aside.

At some point in the recent past someone decided to introduce a “wild card” into the mix, and thus “Odin’s rune” was born. I don’t see the need for it, as the purpose of the runes is to provide guidance, not forecast the future, and there really is no need for a rune which basically says “I can’t help you. It’s in the hands of the gods.”

Being a translated work, there are occasional spelling errors (“wondering” for “wandering” and “you” for “your” for example), but overall it is quite readable with the exception of the fact that paragraph starts are not indented or space broken from the preceding paragraph, which presents each page as a monolithic block of words.

My feelings about this kit are ambivalent at best. Lo Scarabeo produces some high quality divinatory sets and I am pleased to own several of them. This set, in my opinion, is not up to their usual high standards. Had it been produced by another company I would have been less disappointed. I hesitate to give it a glowing endorsement. I cannot say it is badly made, either. In the end, I must settle for saying that it is good but not excellent.