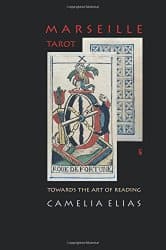 It was Camelia Elias’ tarot blog, Tarotflexions, which first drew me to her work. Her observations there are smart and incisive, and her approach to tarot is quite different from mine, which means I’m always learning something new. Her essay in The Magiculum1 was one of the strongest in that collection, and I was excited to see a more focused effort on tarot, and this book certainly delivers.

Marseille Tarot focuses on Elias’ preferred deck, Carolus Zoya’s Tarot de Marseille, a deck created in Turin at the end of the 18th century. The book includes numerous full colour images, and the deck is based on a common Marseille pattern, so while this particular deck is unavailable for purchase, the insights provided here can easily be applied to any Marseille deck, or even other tarot patterns.

As I mentioned, Elias’ approach to tarot is quite different from mine, and understanding her background helped me ground my appreciation of the way she works with tarot. While my background is steeped in history and occult theory, Elias has a background in shamanism and Druidry, is a member of the Order of Bards, Ovates, and Druids, and is well versed in the logic of cunning folk magick. Cunning folk traditions are largely oral, and Elias uses a visual argument to determine a card’s meaning, its relationship to its neighbours, and follow its story. She works from the idea that “imposed meanings are not really as interesting as derived meanings,”2 and makes a conscious decision to steer clear of tarot history, and finds no benefit in “squaring off” against historical research of the cards.3

In Elias’ practice, she doesn’t distinguish between the way she reads the tarot and regular playing cards,4 and where most tarot books tackle the trump cards, and then delve into the pips, with each card getting its own unique definition and description, Elias’ approach is more holistic. Each trump card does indeed come with an image from the Zoya Tarot de Marseille, keywords, function, health indicators, and list of public functions it could suggest when paired with other trump cards, and a brief three card reading, denoting how the cards interrelate, but the pips are another story.

Rather than provide individual descriptions for each of the pips and court cards, Elias gives broad descriptions for each suit, number, face card, and explains how each of these interrelate. The pip colour symbolism she describes is based on French-suited cards, with cups and coins deemed symbolically red, and swords and batons symbolically black. This is analogous to the cards in Italian playing cards and tarots where cups and coins are “round” or “female” suits, and swords and batons are “long” or “male” suits. The symbolic logic she presents is intuitive, for example, “Hearts and Coins are close to us; we hold them in our hand. Swords and batons create distance,”5 and I like its style. There’s an internal logic to the number symbolism she uses that I also like. Card reading becomes a sort of intuitive storytelling, and there’s a poetry to her style that I admire.

As a general rule, she uses a cunning folk method with visual cues from the cards to “find a way to own the image” she reads. In the event of conflict between the two, she sides with the image, and what’s happening with the cards, and deems veering from this “stubbornness and sheer dogmatism.”6 There’s certainly sense to that. Unusual correspondences are given for each suit: coins are equated with diamonds, and are associated with spring, fire, and the east; cups with hearts, summer, water, and the south; batons with clubs, autumn, air, and the west; and swords with spades, winter, earth, and the north.7 This will provide quite different interpretations to those found in most modern tarot decks, and may take some getting used to.

Elias raises the important question of agency in a reading, and her method for determining who has it, and how it’s being directed, comes from the positions of the figures on the cards, and visual observations that help build that narrative. Various spreads are offered, such as the French Cross and the Council of 13, though Elias finds more nuance in line readings, and makes a solid argument for their use. Elaborate spreads may look fancy, but if they don’t provide as much information to the client, then what use are they really? As she notes, the primary function of any reading is to uncover blind spots,8 and we each should do this in the best way we know how. She advises sticking to the cards, even when what they have to say isn’t very nice. It’s not for us, as readers, necessarily to determine how that plays out.

Elias takes interpretations in new directions, sees new things in the cards, specific to Zoya’s deck, but often relevant to other Tarots des Marseille, guided by intuition and a personal connection to the cards. Her three card readings give a synthesis of all three cards, rather than break them down one by one to examine them individually. As a result, the readings can be blunt, and while they’re rarely presented in the way I would to a client, each reader has their own style, and Elias’ style seems to suit her clients. She says,

If some don’t like what the cards suggest, they go home and change their situation. Some never want to heed attention and can feel downright insulted by the cards. To each their own. But the reader is not responsible for people’s feelings, for what people make of the reading, or for what they get out of it. The reader is responsible for delivering a useful statement, and for staying on track and true to the cards. If clarifications are asked for, the reader is also responsible for trying to make things clear. Is there one precise sentence that gathers the essence of the cards on the table? Then fling it. Demonstrate how what you say is useful.9

Being useful is a primary goal in my readings too, but I have a different approach, and instead follow Austin Osman Spare’s method, as outlined in Two Tracts on Cartomancy, where he, as the reader, decides what information is useful to impart, and how.10

Likewise, when Elias says, “As modern card readers are rediscovering old traditions, some are quite excited at the idea that one can actually read the Tarot without always having to lecture on each individual card and how it might relate to the tree of life, ceremonial magic, or astrology. “11 I would agree, but suggest that while card readers can become familiar with these associations and base their readings on them, they don’t necessarily have to share this basis for interpretation with their clients any more than those who read in a cunning folk style have to share their basis for interpretation. This comes down more to the style of reading and sharing information, rather than necessarily the basis for the associations being made.

For today’s tarot readers, overwhelmed with a variety of choice in the rich symbolism available in contemporary decks, the Tarot de Marseille may seem opaque: trumps that tell a story we’ve forgotten, court cards with little relatable political significance, and pips devoid of scenes and figures. And yet these very factors that distance it also keep it clean, and provide a unique opportunity to get back to basics. In Marseille Tarot, Camelia Elias’s stripped down approach does just that. The clear, direct style of her cunning folk method is refreshingly devoid of the overwrought mysticism that often obscures more historical and occult approaches to tarot, and is definitely worth exploring.