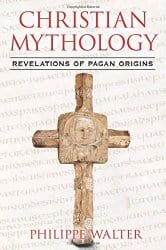 We all know the story: as Christianity moved into Europe it absorbed and transformed elements from Paganism to help convert the population. Pope Gregory told Saint Augustine not to destroy Pagan temples, but to exorcise and bless them, not to ban festivals but “let some other solemnity be substituted in its place, such as a day of dedication or the festivals of the holy martyrs whose relics are enshrined [in the converted temples].”1 The idea was that by adopting Pagan places and festival dates it would be easier to convert people through familiarity.

In Christian Mythology: Revelations of Pagan Origins, the question Philippe Walter raises is this: how much of Christian mythology and celebration is a carry-over from a pre-Christian Pagan Europe? Walter is a professor of medieval French literature, so he is very well-read in the literature and folk tales of the times, which he believes preserve the Pagan elements before they were completely lost into Christianity.

His position is that “Carnival was a religion – it was even the religion preceding Christianity.”2 Carnival, in his usage, is a series of eight festival periods, corresponding to the (modern) Pagan Wheel of the Year, and the Christian counterparts around those dates, which predated Christianity’s arrival in Europe. In fact, he claims, it “goes back to an ancient and venerable time (at least in the Celtic and Indo-European memory).”3 He begins his text on shaky ground when he suggests that Carnival was the religion of Europe. While he focuses on the French and Celtic regions, there is an implication of an apparently unified thread of Carnival throughout European Paganism, which is painted as a monolithic belief, rather than a variety of faiths. In addition to that claim, to support his idea of an ancient thread of Paganism he draws links between such things as the sacrifice of the fattened cow, and the Hindu veneration of the cow as sacred,4 despite the fact that such a sacrifice would be an anathema to a Hindu person.

The book begins with this introduction on questionable grounds, and claims that Carnival is an etymological mystery (it is5) but that the truth of the matter is that it comes from Carna, a Roman goddess associated with meat (pork) and beans, and her feasts were the basis of Carnival, which is not attested to outside of Walter’s theoretical etymology.

After that, each of the eight “Carnival Feasts” are given their own chapter in which Walter discusses the Pagan folklore of the holiday, the Catholic saint or saints connected to the day, or in several cases a variety of days near the holiday, and then he spends time synthesizing them. Walter shows how a god becomes a saint, or how their symbol gets transposed onto a saint. All the while he draws on medieval French literature to illustrate the surviving ideas of the Carnival origin.

All in all, Walter could have reined in his claims more. His analysis of Christian hagiographies and French literature to illustrate their potential connection to a common source in pre-Christian beliefs is very interesting, and mostly well done. Some links are a bit of a stretch, but others are very solid. Trying to link St. John’s name to Janus, to connect the feast of St. John (June 24) with Janus’s transitional nature,6 seems a bit of a stretch. Suggesting that the Virgin Mary was used to supplant various faerie queens and mother goddess figures, specifically celebrated in May, a lot more credible and supported.7

The trouble is, he tries to link everything back to his belief in a Carnival religion and the Carnival series of festivals. If he only drew the connections between hagiographies, literature, and Pagan festivals, this would be a better book, but his insistence on trying to link it to a unified proto-Pagan Carnival faith detracts from the text. If you’re interested in the connection between the faiths, then Christian Mythology: Revelations of Pagan Origins isn’t a bad book to read, just be prepared to question the sections about Carnival.