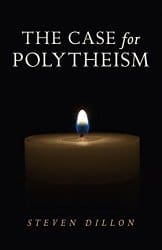 My first impression of Steven Dillon’s The Case for Polytheism was of scattered musings on the concept of divinity. It was through a second reading that I found Dillon’s intention, and what a wonderful surprise.

The Case for Polytheism “seeks to prove…the existence of God or gods, and to acquire knowledge about them,” so non-polytheists may entertain the idea, at least as an exercise in cognitive dissonance. This is real discussion on the nut and bolts of what polytheists believe, and some of the why.

Steven Dillon is Pagan, previously a Catholic and spent time in seminary. His sensitivity to the topic is evident through careful wording, and clear grasp on not only his point of view, but the other voices in this conversation. Dillon creates “an exercise in natural theology” with some exciting twists and turns. Dillon’s reasonings are widely influenced and full of a clear passion for his topic.

The topic’s complexity presents a unique discussion in The Case for Polytheism. I particularly enjoy Dillon’s connection to the philosophers of ancient Paganism. Modern polytheists are carrying on a long-standing tradition by engaging in this exploration. Dillon encourages polytheists of many paths, whether Pagan, Christian, or Jewish, to add their own voices to the dialogue. Dillon argues that theism — the belief that at least one god exists — has been the domain of monotheists for very long. This kind of interfaith-polytheism is oddly exciting. It gives these religions a chance to relax on one issue of Polytheism is coexistent by nature, with the existence of “your god” and “my god” firmly accepted at the same time. This is an old idea, and one that Dillon remarks is absent in many progressive and current conversations about religion and acceptance. Encouraging other faiths to talk polytheism seriously is a first step in easing some of the tension the past two thousand years has supported.

The Case for Polytheism makes its case over five chapters and througha very interesting bibliography. Each chapter seeks to answer a question regarding a possible god’s existence. Dillon discusses what criteria can be considered for godhood, the existence of a possible god, if there may be more than one (if one exists, why not more?), if so, do they have a morality?

Dillon rounds out the book with a chapter of questions that can be used as discussion prompts or further philosophical musings. This book will be a great addition to any comparative or contemporary religions class or group. Interfaith programs should with no doubt have copies of this book accessible for fostering a wider understanding of polytheism. I would also recommend it for occultists who seek deeper contemplation on their beliefs about the gods they may work with. It took a second reading for me to appreciate all the hard work and details Dillon included here. The thought experiments and examples are varied, though I had a difficult time following Dillon’s use of Aletheia — Greek for “being evident.” Those with a deeper study of theology and philosophy will no doubt be more familiar with this usage.

My favourite of Dillon’s examples is that of experience “rather than reasoning.” He states that the many different encounters with gods support polytheists’ claims. Dillon also muses on a hierarchy of gods, allocation of followers, and the exciting idea that the gods may not have a morality we mortals can fully understand. As our current political and religious discourses are so often polarized, I cherish the idea of gods whose ways and means vary. The lack of gods’ needing to be “good” makes a certain sense when reasoning that a god may or may not have a physical manifestation, and therefore has far fewer consequences than we may experience.

Dillon’s work excites me in that he furthers a rich tradition of Pagan polytheists discussing their beliefs in earnest. I hope to see even more of this discussion in print, around fires, in academia, and the Internet around the polytheistic world. After all, if we can assume that people truly believe every interaction with their god(s), we may further think that each of these gods could exist. It is a simple thought, and one that deserves serious scholarship and discourse. The Case for Polytheism serves to build a collective story of polytheism and the coexistence of theists, and Steven Dillon has succeeded in opening that dialogue.