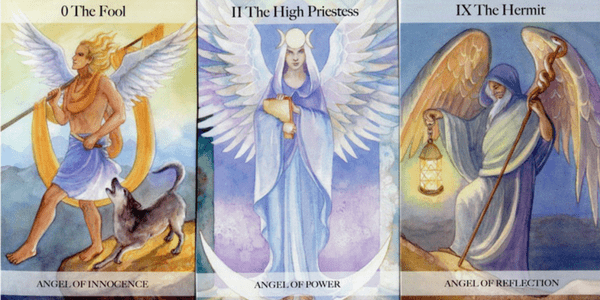 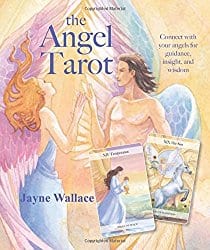 The Angel Tarot, by Jayne Wallace

Jayne Wallace, founder of Psychic Sisters, has provided a great service to the tarot community with the release of her first deck The Angel Tarot. The deck feels charged with a powerful light energy that ignites a sense of calm and serenity deep within the soul. The best way to describe the sensation of the deck’s ambience is as a stream of reiki energy flowing through your entire body, lifting blocks and removing obstacles. The entire deck feels so infused with healing energy that simply touching the deck over the course of getting to know it has been enough to lay my mind to rest.

From the time the Angel Tarot arrived, I felt the grace radiating from the box. The box of the deck is a bit awkward, as it is a pull apart style, which makes it rather difficult to get the cards in and out. A few times it has fallen and the cards tumbled out everywhere. Even when I pick it up, occasionally the two sides come apart and all the cards will slide out. Aside from the box design, the cards themselves are a good size, and that allows for them to be comfortably held in the palm on one’s hand. Shuffling them is easy and smooth, and the cards have a good stock quality.

The deck features the standard 78 cards of tarot, both major and minor cards. The minor cards are colour coded by element and they are all similar in design. The background of all the minor cards is a pair of angel wings in the coded colour for the representative elemental suit (purple, red, blue and green) and then an image of the suit (sword, wand, cup, pentacle, respectively) to depict the number. The name of the card is at the top, and at the bottom of every card is a one or two word phrase. For instance, the Three of Pentacles features a background of green angel wings and three golden pentacles with the word “Action” at the bottom.

The major arcana features colourful pastel images of an angel depicted in the same imagery as the traditional the Rider-Waite-Smith (RWS) tarot deck. For one who is familiar with this imagery, this deck would be easily accessible, for it features the same depictions of each major card, such as the Strength card showing a woman opening a lion’s mouth and Justice portrayed by an angel holding up a scale and sword. The angels on the cards look hand-drawn and convey a sense of humility and peace. Refreshingly, the angels portraying the symbolism of the cards are diverse in gender, race, and facial features. The imagery makes the angels feel easily accessible and as though the information coming through is for the highest good.

I absolutely love the simplicity of the design, and feel it lends itself to quick, intuitive readings, because your mind is working more on a subconscious level, taking in the energy of the colour and number of the card, rather than the intricately detailed images on the traditional RWS deck for the minor cards. The words at the bottom could be immensely useful to someone who is in the process of learning how to read the cards, and also be helpful for giving an added layer of information to a querent. I appreciate the inclusion of all types of people in the portrayal of the angels, as I read for a wide array of people, and feel this deck would be suitable for a crowd.

The guidebook is larger than most, and brightly coloured. It is comparable to a tarot guidebook one may buy in the store when learning how to read the cards, and seems like it would be immensely helpful to anyone just learning how to interpret tarot. For each major arcana card, the guidebook provides a description featuring the numerological significance, keywords, meaning of the card, angel message, and a power affirmation. In this way, it provides a mixture of blunt honesty in the card’s meaning, with the angel message giving more spiritual guidance about how the message can be interpreted. The minor arcana descriptions include the radiant pictures, as well as keywords and angel messages, which are longer than the major angel messages. The minor arcana did not include a meaning of the card per se, but the angel message is significant enough to properly interpret a reading. At the front of the guidebook is an introduction on how to do a reading, and a few spread options one can use for the deck.

The peaceful pastel colouring of the deck lends itself to the weariest of inquiries with surprisingly accuracy. Even with the angelic resonant energy of the deck, when put to use, the cards provide insight with slicing accuracy that cut right to the heart of the matter. This deck has become my go-to since it arrived, because it has been the most accurate in personal readings. This was surprising to me, as sometimes I find angel decks to be subtle, almost glazing over the nitty-gritty. However, the Angel Tarot has a candid expression of honesty that has proved to be spot-on in readings. The energy of the angels as keepers of universal truths readily comes through in a way that is beyond any religious dogma.

I have used the Angel Tarot to read for two clients who both came back to say that everything revealed by the cards turned out to be accurate, and the readings the cards provided were insightful. During the reading, both querents commented on how they enjoyed being able to read the word at the bottom of the card when placed down, as that helped them to focus and process the information given. I enjoy when this happens with querents, as the reading becomes more embodied for them when they too feel in on absorbing the divination of the deck, rather than it merely coming through me without them having their own personalized connection to the cards. For these reasons, I feel this deck is highly suitable for both personal readings, and reading for others.

Overall, I highly recommend The Angel Tarot to anyone who is looking for a deck filled with both wisdom and grace. The cards are imbued with a strong energy that is resonant to the touch, and they convey a feeling of being held by strong, yet gentle angelic forces. The design of the cards and accompanying guidebook are perfect for those new to tarot, and people who are learning, seeking to strengthen their confidence reading for others. Yet, I do also feel that a seasoned reader would enjoy this deck for the personal accuracy I have had with the cards. It could just be a good personal fit for me, but my intuition tells me that the energy Jayne Wallace has put into this deck was set with the intention to yield truly remarkable results, and it is absolutely worth checking out.