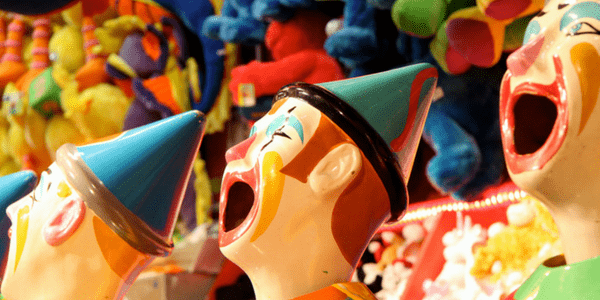 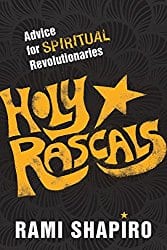 In his most recent book, Holy Rascals: Advice for Spiritual Revolutionaries, Rabbi Rami Shapiro describes those who fall into this category as the ones that give humour to spirituality, not to destroy faith, but to show some of the ridiculousness involved in religious practices. A holy rascal is trying to show that god is not an invisible being in the air, judging your every sneeze, but is us and we are god(s). We are not separate from that energy that created all of this, no matter what name you give it; where we start and it ends cannot be quantified. This should not make it any less amazing, for the means we too are just as amazing as it.

The Lakota called them Heyoka (“crazy”) while the Arapaho called them Ha Hawkan (“holy idiot”). These were the sacred clowns and shamans.1 They were the ones that would be in the ceremonies doing the opposite of what was normal and challenging the sacred to keep people questioning everything. Similar to the medieval jesters in the royal courts that could tell the king to his face what everyone was thinking without repercussions, some of the time. The Fool in the tarot deck seen stepping off the cliff into the unknown without a worry of what is to come as they start on the path of change. The trickster, fool, clown and jester are childlike ones, who will point out the emperor’s lack of clothing, though they may play along with it for a time to enjoy the humour in the nonsense.

It should be ok to ask why, and if a belief system thinks that you shouldn’t, then it might be time to question that belief or at least the people telling you not to question it. Holy Rascals is not a book to sit down and read through in a day. It’s more like a book to open to random pages and see what pop ups. It’s to advise someone questioning some of the rigidness that is too often seen in religion, and may not be worth the time. It reminds you to throw back your head with a hearty laugh and move on.

Saints and scoundrels both claim to know something you don’t know. Saints want to teach so you too will know. Scoundrels want to be worshiped so you never have to know.2

Shapiro is not showing a new concept; you’ve had the Church of the Flying Spaghetti Monster for years, where believers wear colanders on their heads and were recognized as an actual church in some countries.3 It’s completely tongue in cheek, but it falls into the same idea of turning religion on its head so as to have people take a second look or at least a double take.

Shapiro uses the term “brand-named religion” to describe the mainstream religions that are trying to sell something like a chain corporation. They want devotion and everyone to look the other way as to not notice the man behind the curtain like in the Wonderful Wizard of Oz. This is the idea behind religions that don’t bend and rather prefer to have blind devotion. It is the extreme that can be found in any organized religion, but shouldn’t spoil the whole.

Now, Holy Rascals does focus more on the mainstream religious texts such as the Old Testament, New Testament, Torah, and Quran with quotes from various spiritual figures such as the Dalai Lama sprinkled throughout the texts. It doesn’t go much into the more fringe belief system, but Shapiro still shows how these brand-name religions can be useful and do good — it’s the people interpreting these texts that create limits.

This book contains material on God. God is a matter of belief, beliefs cannot be proven, and the beliefs promoted in this book are only some among many. Read this book critically and with an open mind. If it leads you to living life more justly and compassionately, learn from it. If not, move on.4

Holy Rascals does get repetitive after a while but it doesn’t try to be too serious. That’s not what a sacred clown or holy rascal does; they are there to take a person’s ego down a notch. Shapiro writes, “Religious people often prefer to be right rather than compassionate. They don’t want to give up their egotism, they want their religion to endorse their ego, their identity”.5

Finding humour in religion and questioning it should not be a mark of disrespect. If someone is taking it so seriously they balk at any humour or fear being struck down for cracking a joke, then they are the ones in most need of re-evaluating where they stand within their belief, and ought to consider why they can’t laugh and enjoy being in their faith with compassion and love.

About halfway through the book, you have chapter 68, which talks about the free prize insight. Shapiro writes, “One way our religious professionals keep us attached to their story is to promise a prize to those who stay.” Shapiro gives multiple examples and then ends it with, “As it turns out, the best prize is one you collective after you die. That way, if it turns out there is no prize and your history was, in fact, just a story, you can’t complain to the elite or warn the masses. You’re dead.”6

This book may not be for everyone, perhaps if you don’t follow or were not raised in the Abrahamic belief systems such as Judaism, Islam, or Christianity, it might not connect. Setting that aside, I think the humour can be beneficial to someone trying to connect with spirituality on a more light-hearted level. If you do read through Holy Rascals, I would say a couple of run-throughs would be best. This is not a book to try and digest in one go ahead, but rather to take apart in chunks or randomly flip to a page when you’re feeling a bit weighed down by the seriousness of belief. All of this may be made up, but we can at least enjoy the ride.