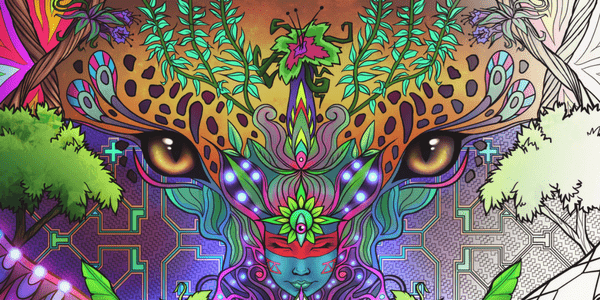 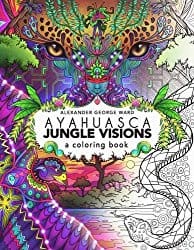 When I saw a contest post about Ayahuasca Jungle Visions in a mainstream Facebook colouring group I belong to, I did a double take. It seemed such an unlikely place for a reference to an adult colouring book based on traditional Peruvian Amazonian plant medicine. But then, magick has a way of making unlikely connections that turn out to be true and meaningful and needed — and sublimely beautiful.

I followed the link and found an interview with the author,1 Alexander George Ward, and a flip-through of the book2 — and quickly requested a review copy. Ward has included a narrative within the colouring book, and in the introduction he writes, “I hope I managed to capture a small part of the magic I received in the jungle.” He did; his colouring book conveys it well, at the same time inviting his readers into it. Ayahuasca is said to induce fantastical visions and profound creativity in those who partake, and it certainly seemed to do so for him.

Ward is a visionary artist who traveled into the Amazon jungle and over several years lived with and learned from the indigenous Shipibo culture that still thrives there. One family he lived with performed ayahuasca healing ceremonies for the community, in which Ward participated.

Ayahuasca is a sacred medicine originating from ancient Amazonian tribes. A brew created from the mixing of the Banisteriopsis caapi vine and the Psychotria viridis leaf. Together they create the mother of all medicine: the Ayahuasca. A sacred healing sacrament,” Ward writes.

The images and narrative in the book are comprised from Ward’s total experience in the jungle, not just the sacred ceremonies. They touch upon universal shamanic concepts such as interconnectedness, the sanctity of life, oneness, and healing, and illustrate the particular way these are expressed through the Shipibo way of life. It is a way of life opposite to our modern culture in every way that matters — a concept also explored in the book. How and why? The answers to those questions can and do fill volumes and their study is often the work of a lifetime. If this colouring book awakens even the least bit of curiosity in you about that, the magick has touched you. Go explore.

If you would prefer to skip the spirituality, however, and simply want to colour, Ayahuasca Jungle Visions is technically a fine book. The front and back cover are visually stunning, and Ward has drawn pictures to suit a range colouring experience, from beginner to advanced. What I would call beginner drawings, such as The Plants Speak,” “Gratutide,” and even “Hola!,” a self-portrait of the author, are elegant. The more advanced drawings, such as “Interconnected,” “Heal Thyself,” and “Modernity” are complex, intricate, and sophisticated. Don’t be daunted by any of it, Ward says, because “if at any time you feel lost, know that all you need to do is color one empty space at a time.”

The one disappointment I have with Ayahuasca Jungle Visions — and I’m afraid it’s a big one — is the paper. As with many colouring books, it’s not thick enough to discourage marker ink from bleeding through to whatever is printed on the other side. In this case, the informative and poetic narrative is printed on the other side. Regrettable, since the text explains Ward’s thoughts behind the picture on the facing page, and it’s just as important in conveying the shamanic concepts as the images. Once you’ve coloured the whole book, portions of the narrative will be obscured and unreadable. The only solution is to copy it down somewhere else before you start colouring. Using coloured pencils prevents the bleed through, but I feel they are not vivid enough to do many of these images justice.

A colour protector page is provided, so apparently some thought was given to bleed through. If you don’t tear out your colouring page, you can slip the protector behind it so the colour won’t run through onto the next design (but it does nothing to stop the bleeding through to the text beneath as explained above). If you do choose to tear your pages out, perforations make that easier. And at the back there’s an index of images — something I’ve never seen before in a colouring book, but so useful if you want to put your unattached pages back in order to follow the narrative. The index is followed by a few sell pages for related books sold by the publisher.

Alexander George Ward is a supremely talented artist and his Ayahuasca Jungle Visions is a mesmerizing colouring book. It’s not only fun and challenging to colour, but it may initiate a journey of your own, from which you may return changed and healed. It’s up to you whether to go all the way into the depths of your spirit and creativity, as Ward invites you to. As in all things shamanic, let your heart be your guide.